You are here: What's On > BSO Concert Season Coda 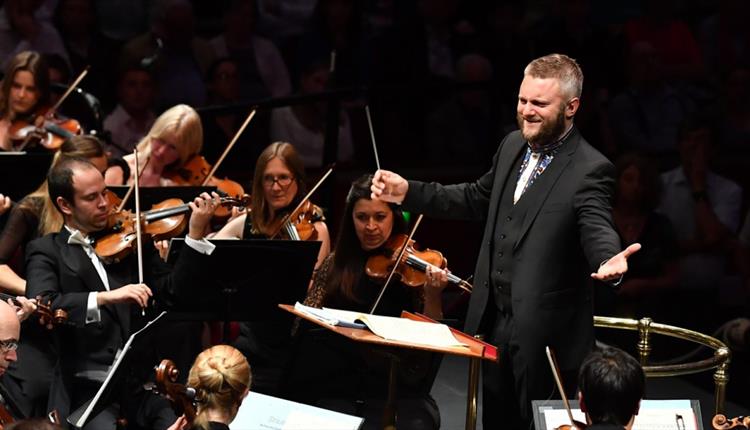 *Please note this is a virtual event*

Enjoy the final six concerts of the Bournemouth Symphony Orchestra 2020/21 Season streamed from Lighthouse, Poole direct to your living room - wherever you are!

The BSO’s 2020/21 Concert Season is rounded off with a coda of six concerts that celebrate the glory of symphonic writing. We welcome back Mark Wigglesworth for two performances featuring British and German masterpieces, Andreas Ottensamer returns to give his UK conducting debut, and we complete our digital journey with Kirill and an evening of musical magic and dreams.

Details of all concerts are listed below. Click on the titles to take you to each individual event page or view the full pdf leaflet by clicking on the downoad link.

Each concert is streamed live from Lighthouse, Poole at the advertised date and time, after which it is available to watch on demand for 30 days.

Laurence Olivier’s film of Henry V broke new ground in several artistic aspects; not least of these was Walton’s score, which brilliantly achieved a convincing “period” feel. The movements of the concert suite are arranged in a neat, symmetrical arch, packed with beautiful tunes – rousing, tender and melancholy. For all its warmth, melodic generosity and seeming spaciousness, Vaughan Williams’ Fifth Symphony is also an intricate, highly sophisticated work. The tonal ambiguity of its opening is ultimately resolved in radiant orchestral polyphony, recalling the spirit of the Elizabethan choral masters.

Launched by a stirring call to attention Mozart’s brilliant Haffner Symphony marked a big departure for the period. The finale, which Mozart requested be played “as fast as possible” bubbles over with comic-opera vivaciousness. Mendelssohn’s musical Hebridean postcard conjures up the grandeur of Fingal’s Cave, the swelling of the sea, the light on the water and the fury of the waves breaking on the cliffs. Mendelssohn’s clear joy in evoking the soul of Italy is present throughout his Fourth Symphony. Extroverted from the outset, conjuring up sunny skies and radiant landscapes in a virtually flawless assembly of airy and fiery dances, it never lets the excitement lapse for a moment.

Verklärte Nacht (Transfigured Night) betrays Schoenberg’s love of Brahms in its intricate textures and interwoven lines; it is an ecstatically sensual evocation of new love transcending the burden of old sin. It took Brahms more than twenty years to approach the challenge of his first symphony – it was no “laughing matter” to write a symphony after Beethoven! – incorporating ideas and innovations that moved symphonic writing forward. Opening with dramatic intensity, it gives way to peace and serenity; the finale has been described as “one of the sublimest utterances human ears have heard” – its hymn-like theme commuted into a glorious and magnificent conclusion.

It was during a time of tormented courtship that Schumann’s compositions had become more experimental and complex. His Kreisleriana was a product of this fertile, fraught period. The music swings violently and suddenly between agitation and lyrical calm, dread and elation. Romances were one of Clara Schumann’s favourite compositional forms, which is perhaps why this particular work is so effective – the three contrasting movements bursting with character. Franck’s lone Sonata in A Major remains his best-known chamber work. From its expansive opening to the famous finale, the music flows with melodic fluency and effortless poise.

The Song of Nature
Beethoven and Wagner

Beethoven’s love of nature shines through in his Sixth Symphony. The opening Awakening of Cheerful Feeling upon Arriving in the Country is followed by the aptly flowing grace of a Scene by the Brook, complete with calls of a nightingale, quail and cuckoo. The Merry Assembly of Country Folk is interrupted by a violent thunderstorm, but soon a mood of serenity is restored by the final, uplifting Shepherds’ Song of Thanksgiving. Wagner’s comic opera Die Meistersinger von Nürnberg is his most human, with no gods, potions or mythical journeys. Inspired by the real 16th century Master Singer’s Guild of Nuremberg and their famous songwriting competitions, the story is a metaphor for Wagner’s own musical struggle.

Light and carefree, Mendelssohn’s incidental music depicts the fairy realm of Shakespeare’s play with enchanting, perhaps even enchanted, music full of other-worldly yet subtle energy. Scriabin’s Rêverie, for all its brevity, is packed full of luscious harmonies interwoven to create a swirling dreamscape that ebbs and flows mysteriously. One of the really great, late-Romantic symphonies, Sibelius’ Fifth has an epic quality; a sweep and grandeur which triumphs over passing feelings of anxiety to celebrate the heroic, optimistic power of life. The gorgeous opening sunrise is best described by Sibelius himself. “God opens His door for a moment and His orchestra plays.” This was no boast!