You are here: Home > What's On > The Coastal Comedy Show Presenting the Stupendous Adam Bloom! 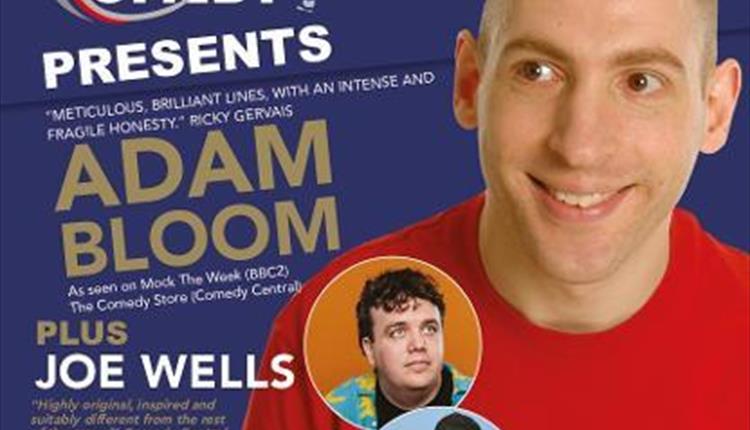 Adam has appeared on and written for various stand-up and panel shows on TV, and is a Time Out Award winner for best stand-up. He's that funny.

Ricky Gervais says: Adam Bloom has been one of his favourite comedians for ten years: '…Bloom not only has meticulous, brilliant lines, but also an intense and fragile honesty.'

The Independent describes him as being '…in the premier league of comedy,' and The List says: 'Bloom is perhaps the perfect comedian.'

We look forward to welcoming him to the Lighthouse for this special show.

Adam is supported on the night by Joe Wells who's writing career began when his first book 'Touch and Go Joe' about his experiences of OCD was published. He now writes for 'Have I Got News For You' and many more.

Joe has made a name for himself as a stand up comic, writer and speaker and now focuses mainly on his unique brand of comedy and has been very successful in many comedy competitions.

"A star of the future... some of the most surprising and thought-provoking material coming from any comedian in his 20s" The Guardian

Tom Elwes is also appearing on the night. Tom is a stand-up comedian, writer and actor and one of the newest comics to break through on the comedy circuit. As a life-long Londoner, he uses a combination of storytelling and acute observations to make sense of his chaotic existence. His quick wit, charm and high-energy make him one to look out for in the future.

Don't miss this top night out with some of the best acts on the circuit. The night is hosted by local comic Adrienne Coles from award winning Coastal Comedy – see you there!

Lighthouse, Poole’s Centre for the Arts, PooleExperience, explore, discover and join in with the arts at Lighthouse, the largest regional arts centre in the UK