You are here: Things to Do > Beaulieu National Motor Museum 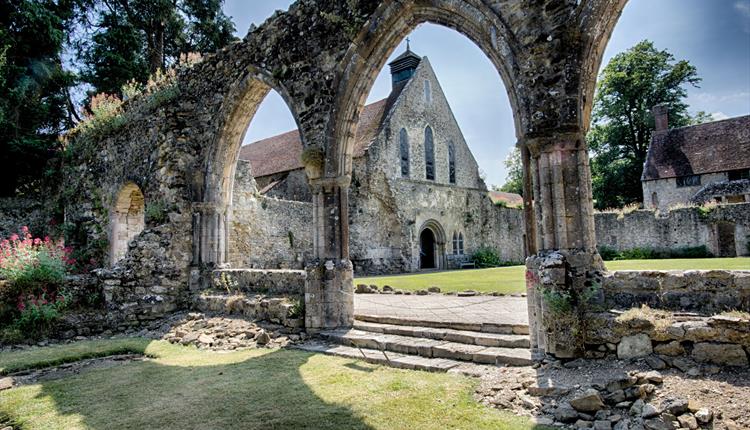 Set in the heart of the New Forest, Beaulieu is a multi-award winning family day out with something for everyone.

With over 250 vehicles in its world famous collection, the Museum tells the story of motoring in Britain from humble beginnings to the present day. Displays include classic cars, historic sporting motors, modern rally cars, F1 racers and a rustic 1930’s country garage.

New for 2019, Celebrate the 50th Anniversary of Chitty Chitty Bang Bang with a fantasmagorical new exhibition. Don’t miss this unique opportunity to see props, costumes, cars and original artwork from the original film. The exhibition is running until 3rd November 2019.

and tells the story of Chitty as the star of the family film and features an original screen Chitty Chitty Bang Bang and a Humber 8hp driven by Truly Scrumptious in the much-loved musical film.

​​​​The World of Top Gear recreates the feel of the Top Gear Studio. See unique behind the scenes footage from Top Gear HQ and cars from the show’s most ambitious challenges.

Explore the magnificent Palace House – Lord Montagu’s family home since 1538 – and discover the history of the house and its former residents. Meet the Butler, Cook and Housemaids and gain an insight into the workings of a Victorian country house.

See recently opened never-before-seen rooms and a newly installed collection of unique Russian Art. Plus visit the restored Victorian Kitchen which has been put back to it’s original layout.

New for the first time at Beaulieu in 2019, a sculpture exhibition featuring the work of more than 50 international and national sculptors will be on show throughout the grounds and gardens of Palace House. 270 sculptures will be set in the perfect surroundings and the unique collection will include sculptures to suit all tastes and budgets. This exhibition will run from May 25th - July 14th 2019.

Beaulieu Abbey was largely destroyed by Henry VIII – but the conserved ruins show the scale of this formerly vast complex. An ancient Abbey building houses a fascinating exhibition on Monastic Life.

Beaulieu’s 50th Fireworks Spectacular will take you Out of this World on Saturday 26th October when the event celebrates the anniversary of the first moon landing.

Uncover the truth behind Beaulieu’s covert wartime role in the Secret Army Exhibition, see your TV and film favourites in On Screen Cars, and enjoy unlimited rides on the mile-long Monorail and replica Veteran Bus.

Events and Exhibitions at Beaulieu in 2019

6 -22 April – Bonnets Galore Easter Holiday
Rev up your Easter holidays! See the sights, sounds and smells of motoring history come to life as vehicles roar into action in the Beaulieu grounds, then try on bonnets of a different kind in Palace House...

May Half term – 25 May – 2 June – Secret Agent Training
Train to be a secret agent at Beaulieu this May half-term, completing cunning challenges to follow in the footsteps of the World War II agents of the Special Operations Executive.

25 May - 14 July - Sculpture at Beaulieu
A sculpture exhibition featuring a unique collection of works from over 60 International and national sculptures throughout the grounds and gardens of the ancestral Montagu home of Palace House.

2 June – Simply Porsche event
Head to Beaulieu as more than 1,000 stylish sports cars join a vibrant display in the grounds of the National Motor Museum.

The unmissable family day out, sponsored by specialists A-Plan Insurance, celebrates the adrenalin-fuelled world of supercars with more than 500 jaw-dropping supercars already booked to join the two-day show in the grounds of the National Motor Museum.

Please note - Online tickets need to be purchased online up to one day in advance.
Some rides are subject to a value added charge including the Simulator and Radio Cars.

Beaulieu is situated in the south of England, in the New Forest between Bournemouth and Southampton, with easy access from London and the Home Counties. By Road - M27 exit junction 2, follow the brown and white tourist signs towards Beaulieu. Sat nav postcode is SO42 7ZN, however please follow brown and white tourist signs to Beaulieu and our visitor entrance. For more detailed directions please visit multimap. For up-to-date travel information, please visit: www.transportdirect.info. Cyclists - if you arrive at Beaulieu by pedal power we will give you 20% off our standard admission.

You can park your car for free in our designated car parks which can hold up to 1,000 cars. We also have overflow car parks for busy event days. There is a separate car park for disabled visitors, near to Visitor Reception.

Visitors driving motorhomes or towing caravans can park their vehicles in the coach park. There are no height restrictions entering or leaving the site.

Need to charge your electric car? Thanks to generous funding by the Sustainable Transport Solutions Fund we have three electric car charging posts available for visitors to use, free of charge. To access either use your own card or borrow one from Visitor Reception (for a small deposit). We have several 7-pin and one 13amp 3 pin connections available.

Be animal aware! The New Forest National Park is home to some amazing animals and we share the roads with horses, donkeys and more. Please read the National Park Authority's advice for New Forest Drivers and drive carefully on your way to Beaulieu.

Travel by train, ferry or bus for all or part of your journey to Beaulieu and we'll reward you with 20% off our standard admission. Simply present your travel tickets on arrival, valid on the day of your visit, to claim your discount. Please note this cannot be used in conjunction with any other offer, including discounted advance online tickets, family tickets, or on major event days. By Bus:

The New Forest Tour's Green Route links Beaulieu with Hythe Ferry (for Southampton), Lyndhurst, Brockenhurst (rail station) and Lymington. Tickets are valid all day on all routes and you can hop on and off wherever you like. For timetables and ticket information visit New Forest Tour.

Wilts & Dorset buses have a limited service between Hythe and Lymington which only runs on Tuesday, Thursday and Saturday. It drops visitors either at the Museum entrance or in Beaulieu village depending upon the route. Please phone 0845 0727 093 – the Wilts & Dorset advisors will help plan your route. (0830-1700 Mon - Fri) or visit morebus.co.uk.

The London to Weymouth train passes regularly through Brockenhurst, which is the closest main line station to Beaulieu. There is a taxi rank at the station and the cost of a journey to Beaulieu by taxi is approx £20. Alternatively, why not hire a bike and cycle the seven miles through the New Forest to Beaulieu? Cycle hire details can be found on the New Forest National Park cycle hire information website. By Ferry: Take the Hythe Ferry across Southampton Water to Hythe, then the 5 mile bus ride to Beaulieu. Alternatively take the Isle of Wight ferry to Lymington and take a bus to Beaulieu.

The New Forest is a great area to explore by bike. For further information, including details of cycle hire operators, visit the Cycling in the New Forest website.

Travel by train, ferry or bus for all or part of your journey to Beaulieu and we'll reward you with 20% off our standard admission. Simply present your travel tickets on arrival, valid on the day of your visit, to claim your discount. Please note this cannot be used in conjunction with any other offer, including discounted advance online tickets, family tickets, or on major event days.