You are here: Home > What's On > The Coastal Comedy Colossal show headlined by Zoe Lyons! 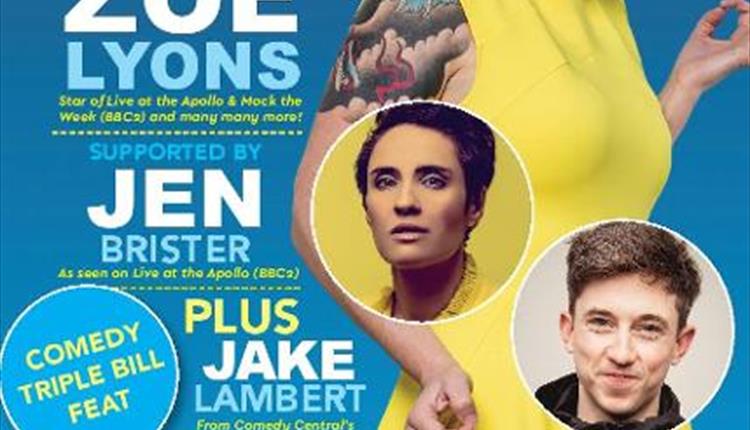 Zoe Lyons is a regular face on our TV screens you will recognise her from:

Live at the Apollo (BBC2)
Michael McIntyre's Comedy Roadshow (BBC1)
Mock the Week (BBC2) and many many more!

Zoe took her first steps down the comedy path in 2003 after training as an actress at the Poor School in London and is now a regular on 'Mock the Week' and a much-loved figure on 'Live At The Apollo', as well as being all over Radio 4.

Zoe now hosts quiz show Lightening on BBC2, has had extensive stints on 'The News Quiz', 'Just A Minute', 'The Now Show' and plenty more and we are delighted to welcome her back to Lighthouse.


"Confident and razor sharp" The Observer "Probably the most impressive British female comic on the circuit." The Skinny Edinburgh

Opening the show is the incredible Jen Brister. Star of the BBC's latest series of Live at the Apollo. As seen on Comedy Central in Live at the Comedy Store and many more.

After performing in front of the legendary Spike Milligan and receiving the luminous and prestigious title of having 'a great pair of Bristols,' Jen knew that comedy was the way forward. So with the help of two jokes and a push up bra she was on her way...Since that heady day Jen has become a critically acclaimed comedian and performed stand up in clubs all over the UK and international comedy circuits

Plus the hilarious Jake Lambert who you may recognise from Comedy Central's Live From The Comedy Store.

Jake who fell into a career as a stand up, after gaining a following on Twitter. He decided to put down his iPhone and pick up a microphone. Jake has gone on to support Seann Walsh, Kerry Godliman, Tom Allen and Rob Beckett on their UK tours as well as writing on Mock The Week, 8 Out of 10 Cats, The Now Show, News Quiz and many more.

This Coastal Comedy show is hosted by Adrienne Coles and has an incredible line-up with something for every comedy lover and 3 TV headliners.

Please note that acts may change due to TV commitments

Lighthouse, Poole’s Centre for the Arts, PooleExperience, explore, discover and join in with the arts at Lighthouse, the largest regional arts centre in the UK