You are here: Things to Do > Terracotta Warriors Museum 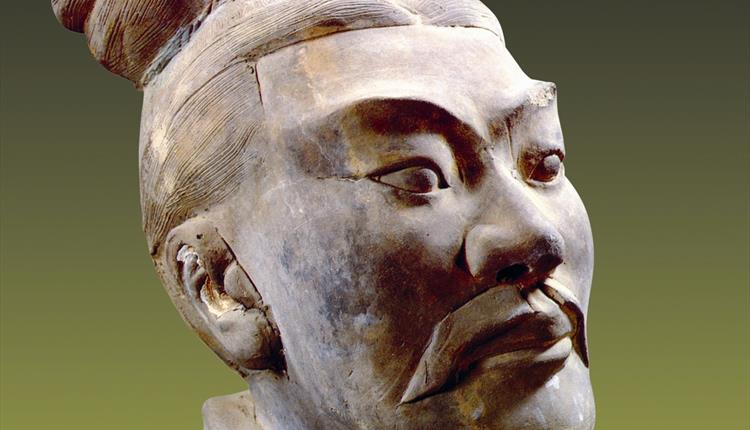 Covid-19 update - Owing to the current situation the museum is closed.  Please keep checking the website and social media for further information.  We look forward to welcoming you to the museum soon.

The only museum outside China dedicated to the amazing Terracotta Warriors, the eighth wonder of the ancient world featuring unique life-size museum replicas from China, costumes, armour and multi-media displays.

The terracotta warriors created worldwide fascination when discovered in 1974 at Xian, China and guarded the tomb of the First Emperor of China, Qin Shi Huangdi, who lived over 2200 years ago. The museum displays unique replicas of the terracotta warriors re-created by museum technicians at the site in Xian.  See crossbowmen, a charioteer, an officer and a general and learn each style and origin of with specail audio programmes.

Complementing the warriors is Qin Shi Huangdi with members of the Royal guard in full recreated costumes and armour.  A section of the excavation shows how figures were unearthed. Multimedia presentations tell the story of the warriors and their discovery.

This small but inspiring exhibition on the Terracotta Warriors of the First Emperor of China's famous Terracotta Army brings together all the wonder of the discovery of these amazing treasures of ancient China.

The terracotta warriors were created by the first Emperor of China, Qin Shi Huang di pronounced - Chin Shi Huang di. This amazing but meglomaniac man conquered and united China from a collection of warring states to become its First Emperor. He built the Great Wall and amassed great works of art. Obsessed with a quest for the secret of immortality, 70,000 workers built his tomb said to be filled with legendary treasures. His 3000 wives and concubines followed him to the grave.

Over 8000 fantastic life-size clay warriors protected his tomb. The Famous Terracotta Army - is now referred to as the eighth wonder of the ancient world. The exhibition at the Terracotta Warriors Museum in Dorchester features a small but spectacular group of these warriors, which have been specially replicated by museum and conservation technicians in China, and skilled craftsmen and specialists of World Heritage. Also featured in the Museum are fabulous costumed recreations of the First Emperor of China, Qin Shih Huang di, himself and his uniformed officers. Dramatic audio and multi-media presentations bring the whole experience stunningly to life.

There has been worldwide fascination in the discovery of the Terracotta Army and it is now regarded as the 8th Wonder of the Ancient World.
Your own kneeling warrior figurine. Prices start from as low as £4.95  The terracotta army was guarding the tomb of the First Emperor of China, Qin Shi Huang di, who lived over 2200 years ago. He became famous for unifying the warring states into what is now China, and for becoming the country's first emperor. He is remembered for instigating the building of the Great Wall of China, and the fanatical fear of death and an obsessive quest for the secret of immortality. This craze for life and the fear of death ultimately gave us the legacy of the terracotta warriors.

The terracotta warriors are unique. Not only are they life-size and individually modelled in clay, but the detail of the figures is astounding. Not only can we observe the construction of body armour of terracotta army, with even the heads of rivets standing out, but the soles of the shoes of the kneeling warriors are modelled with fine tread patterns. The hands and the heads of the terracotta warriors were made separately, and each head is reputed to be different and individual. Although all the warriors were in the pits they had been buried in, many of them were in pieces and have had to be restored. The museum technicians and craftsmen who undertook this difficult task often had to remodel parts to restore areas of the figures that were too badly damaged to be reconstructed.

Technicians and craftsmen have used the same techniques and skills to re-create the majority of the warriors for The Terracotta Warriors Museum, which form the highlight of the exhibition. The figures made in this way are in all respects identical to the originals having been made near the Emperor's tomb in the same clay and fired in the same way as the originals. The warriors stand up to 2 metres tall and weigh up to 300 kilograms.

The terracotta warriors featured on our display comprise of various types including crossbowmen, a charioteer, an officer and a general. The whole group of terracotta army is extremely impressive with audio programmes bring the discovery to life.